The Story Behind: "This Big House (Revisited)"

I have been wanting to make this track come to life, in this way, for a LONG, LONG time... 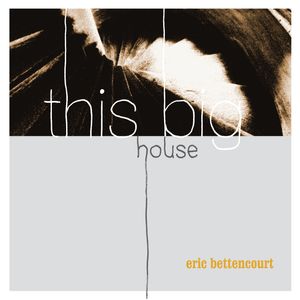 One summer night in early 2009 the song “This Big House” fell out of nowhere, it wrote itself as they say. I knew immediately it was one of the best songs I'd ever written even though I didn't feel like I actually wrote it. It was more like a gift that landed in my lap.

This was in Portland Maine and in January, just six months earlier, I had finally dropped my debut album Fine Old World to a pretty great local response.

Looking back now I see this period as the beginning of “way too much, way too fast”. I'd been recording songs for two or three years by this point and the finished products were piling up. I was getting incredibly anxious to finally share them with the world. So just nine months later came my second full-length, 11-song LP The Giraffe Attack Collection. This one was meant to be heard as a heavier companion to the lighter folk-pop of Fine Old World . I was positively bursting with finished tracks that I couldn't wait to release so to relieve some pressure I started planning to release a five-song EP featuring some of the music that would eventually land on The Giraffe Attack Collection.

Two Wine Glasses/The Fear EP dropped in late July. Aside from the title tracks ("Two Wine Glasses" | "The Fear") I threw on bonus tracks “Lighthouse” and “America Colossus”. I didn't think either were going to make it onto the next record (and they didn't) so it seemed like a good way to clear some on my overflowing musical plate. (In 2020 these were included as bonus tracks on the physical The Giraffe Attack Collection CD).

Track 5 was a solo, acoustic version of “This Big House”; my first ever recording of it. The audio was lifted from a YouTube video I had made shortly after writing it. Popping on this take as a bonus track only half scratched my itch. I was already cooking ideas for a full-blown recording of this song but knew my hands were full due to the lead-up to the CD release party for The Giraffe Attack Collection, which was planned for the end of September. 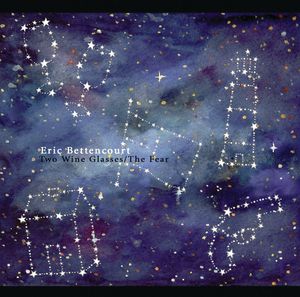 By this time I had become very self-sufficient in my home studio...
...and was doing mostly all the engineering on my own. So, to a click-track, I laid down the basic guitar parts and let the song began settle into an arrangement that felt right. When recording alone like this I like to get the drums down as soon as possible. The feel of the drummer is what informs the rest of the instruments, especially the bass. So I called upon my good friend Charles “Chuck” Gagne who's drum feel was, and still is, one of my absolute favorites.

The one area my home studio was lacking was in the ability to get a great drum sound so I booked some time with Billy Slifka of Bi-Polar Studios in South Portland. He built a killer drum-room in his basement; it's where I pretty much did all of my drum sessions there for the next few years.

As expected Chuck killed it. He formed such a nice pocket groove and lilt to the song that I ended up re-recording everything to match his feel. Once I had completed all my parts I called one of my favorite vocalists, Megan Jo Wilson, to lend some beautiful vocal harmonies. She sang wonderful three-part harmony over everything and ended with some great, angelic “ooooo's and ohhhhs'' for an outro idea that had been percolating.

Once I had finished the final phase of mixing, and was happy enough with the result to begin showing it around, my girlfriend at the time, Liza, said it was too slow. And though her opinion was a bit of a body-blow at first, it quickly became clear that she was 100% right. By the way Liza is an incredibly talented graphic designer and was responsible for the artwork, which I still love.

So I started from scratch...
...and proceeded in exactly the same way I had in the previous weeks but with the click kicked up by about 12 beat-per-minutes. This really was the sweet spot. At the time I was doing lots of drum recording sessions for other people I was producing music for and Chuck was always my go-to guy. I don't remember many details from this time but I'm sure I just rolled this recording redo into one of those sessions. Either way, Chuck killed it again and I got back to work laying down all the instruments.

At the time I was producing an album for Amanda Gervasi. She was a talented, young songwriter very new to the scene and eventually released the stellar album Merry the Ghost in 2010. Since Amanda was often hanging around the digs I enlisted her help in getting the harmony parts down.

After all the hard work Megan Jo had put in I think I must have been too embarrassed to ask her to come back over and do it all again. So Amanda sang all the parts wonderfully, like I knew she would, and I was once again moving forward to the mixing phase.

The This Big House (EP) was released in early December 2009. Because of the upbeat tempo the faster version became the title track. It was the simply the better of the two and I slotted it into the first position on the CD. The second track was “Liza Jane”, a traditional song that I was inspired to cover after hearing The Wood Brothers groovy take on it. (A remixed version of my “Liza Jane” can be heard on Weightless Embrace Vol. 2). Track 3 was the guitar instrumental “My Lady Tuesday”. (This song can now be found as a bonus track on the recent CD pressing of Secret Songs for Secret People). Track 4 was the slower, but still beautiful, version of “This Big House” featuring Megan Jo's vocals.

So why am I releasing this song again?
Because neither of these versions ever set quite right with me and I eventually tried to erase them from existence.

The thing was, I actually loved the overall feel and quality of both recordings but felt my vocals were way too forced sounding; I was still feeling things out as a singer and it was clear that I was going through some sort of a weird phase. In the end what I really wanted was both Megan and Amanda singing on it, together... but that ship had sailed, I thought.

Plus, given all the work that had gone into getting this far, there was no fucking way I was going to bother everyone to re-record this song for a third time, especially after freshly releasing it. It just didn't make sense..

So I gave up on the idea altogether...
...and called the result “good enough” and moved on to a batch of other songs that would eventually come to make up Secret Songs for Secret People.

The "not-quite-rightness" of these recordings kept bothering me and after I sold all the CD's I decided not to jack with reprinting more and from there silently pulled the songs from all the streaming platforms. I just pretended these songs didn't exist and never had. With that, I was once again stuck without having a proper recording of one of my most played songs and that was my new issue.

In 2020 “This Big House” did finally find a home...
...on the album Bric-á-Brac LP. Richard Corson (lead guitar), Pete Genova (bass), Chuck (drums), James Whalen (engineering) and I spent a evening at a camp deep int he Maine woods recording a bunch of my songs in a live setting. A lot of the material that made it onto Bric-á-Brac came from that session. I feel like the band and I caught lightening in a bottle. Just listen to Richard Corson's epic guitar solo. I've found it impossible to get that kinda thing recording alone...

Even though I'm totally happy with that version I recently began thinking back to what I had started in 2009 and it's missed potential. I listened to these older versions for the first time in years and realized that in overall quality and feel they were pretty awesome. I still hated my vocals but that had an easy enough remedy. I began to think a lot about re-vamping it altogether but was stuck at how to get both girls on the same track.

Eventually though, it occurred to me that there's a feature in the recording software I use called “elastic audio” which allows you to stretch and resize sound files without quality loss. If “elastic audio” existed in 2009 I didn't know about it but had recently become familiar with it's application.

Even with this great new tool I knew that lifting all of Megan Jo's vocal takes from the original, slower sessions and then grafting them onto the faster version of the song and syncing them with Amanda's vocals would be a super tedious and frustrating undertaking. And it was. But it was doable. And I did it.

Once past this technical hump I re-sang the lead vocals and layered in some harmonies over the bridge. Next I re-tracked the bass and acoustic guitars. These original tracks were fine but I knew, at this point, I could play better and get a better sound than I had previous. The banjo and guitar solos from the original 2009 sessions I thought came out great so I left them as is. Obviously the Chucks drums remain unchanged.

The icing on the cake...
...for me is that Liza was cool with letting me use her original artwork for this release as well. Since letting the original EP slide into obscurity I've felt it was a bit of a shame that her great cover was no longer included amongst my other albums. Check out Liza's original CD jewel case layout. So good! 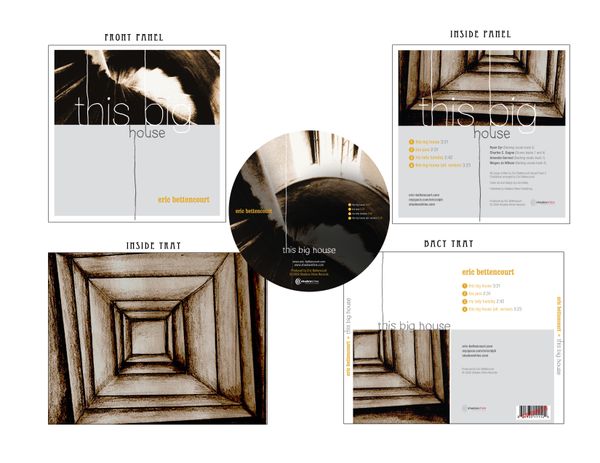 So maybe this undertaking was more for me that you...
I mean, there's nothing quite like tying up a pile of huge, nagging loose-ends and then getting a great result worthy of sharing. I'm so glad this project started gnawing at me again after all these years.

And folks, friends and fans...
I do try to be mindful of not being redundant in the music I release but even though this is technically a song I've already released, I truly feel that “This Big House (Revisited)” will always have it's own place amongst my discography. Let me know if you feel the same or not!

And thanks for following me on this winding, little journey!
New song in five weeks!