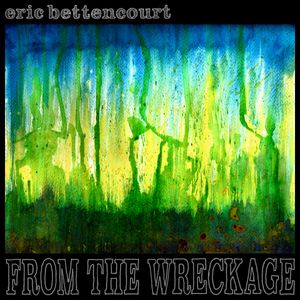 New Single | From the Wreckage

I am excited to let you know that I just released a new Single From the Wreckage (w/ a bonus track) on Bandcamp. It won’t be available on other streaming services until 5/11/2021. For now though you can click the art below or follow this link to hear. (https://ericbettencourt.bandcamp.com/album/from-the-wreckage-single)

You’ve probably heard this one by now…
I wrote From the Wreckage around this time last year. The lock down had been in effect for a few shaky weeks and the dire reality of our collective situation was setting in at last. For those of us who tend to turn inward for our inspiration there quickly emerged an obvious bright spot in all the gloom: All of the sudden we had at our disposal all the time in the world and no place to go. On it’s face it sounds dismal but to people with a bent towards introversion, like me, it was a bit of a dream come true. All those projects and songs I could never find the time for became the order of the day. It was pretty awesome to dig into some big project and have zero distractions day after day. Like many of my musical cohorts working on music gladly became the default.

The jet-fuel behind this song was a result of the mostly-complete unraveling of my emotional state on account of a long-distance love interest. The lyrics should fill in most of that story.

Early on during the writing process I was stuck for a chorus direction so I sent a voice-memo of what I had come up with so far to my friend and songwriter Will Mallett of the Mallett Brothers Band. He dropped me a couple great chord changes and melody ideas that shuttled me past my hangup. Not to long after the song was born.

Once the parts and lyrics were fleshed enough out I started playing it on my then bi-weekly Facebook streams. Wreckage became an instant hit with much of that audience. Here’s a link to the very first time I played it live. (5/5/2020 • Facebook Live w/ Eric Bettencourt) It is still one of my most requested songs.

About the The “Studio” Version…
I am responsible for basically everything you will hear on the track with the exception of the drums and percussion and backing vocals throughout the chorus’s. Although I could have subbed out the job I did my own mixing and editing as well. It’s a part of the process I have really grown to love. Mixing your own song is generally frowned upon in the big-leagues as getting fresh ears involved is never a bad idea. To me though, mixing is the best part after the writing is done. Letting someone else mix your songs is like drawing a picture and then letting them paint it. Nah.

The drums were recorded by Mike Meadows, the same fella you can hear on Lost in the Woods, from Bric-á-Brac, my latest LP. He has his own studio and was able to do his thing with the bare bones recording I sent. What he sent back was a different flavor than what I originally had in mind. And then, along with a sudden, all-consuming move to Maine the whole song got delayed and eventually stalled out for many months. Eventually the Latin-ish groove really began to grow on me and a few short months ago I begin to build the song around it. Now complete, I wouldn’t want to hear it any other way.

A close friend on mine, Ben Jones (of Beat Root Revival) saved me the grueling task of singing my own harmonies. His parts, over the chorus’s, adds some great coloration that couldn’t have achieved with my voice. It was another welcome collaboration and we are already planning on more in the future.

Well I won’t keep you much longer but do have to remind you in case I haven’t driven the point home by now I will try again… I released Bric-á-Brac, a whole new album last year. It was almost five years worth of work under some truly grueling circumstances (I came down with shingles literally the week I started it; not exactly the liftoff I was hoping for). The project had become somewhat of an albatross around my neck but CV19 allowed for some much needed time for going deep and straightening out the rough spots. The feedback I’ve received from so many of you since it’s release has been truly great and encouraging. Plus my Spotify spins seem to be going up because of it. So I’ll call it a win. If you haven’t checked it out you can stream and order the CD (with Hi-Rez Digital files) at Bandcamp. Like all my other albums it’s streamable on all the usual music platforms.

Thanks for listening and all the support over this insane year.
Could never be making music at the rate I have been without you!

•About the Cover Art
I’m still drawing inspiration from a strange series of watercolors I painted a couple years ago. Wrote a little about that here (uneze: art) Also digging the idea of keeping the artwork and design for singles consistent (e.g. Magnetic Fields)